WADI RUM, JORDAN: Journey to Wadi Rum was like journey to another world or another planet. Wadi Rum, meaning Valley of the Moon, is the largest and most magnificent of Jordan’s desert landscapes. Vast scenery of Wadi Rum is endless and is at everywhere you look. This silent and timeless place is still untouched by humans although it has been inhabited by many cultures since prehistoric time. This is a vast wilderness that holds spectacular treasures from as early as 4000 years ago. Wadi Rum was added to UNESCO World Heritage site for its natural and cultural significance in 2011. 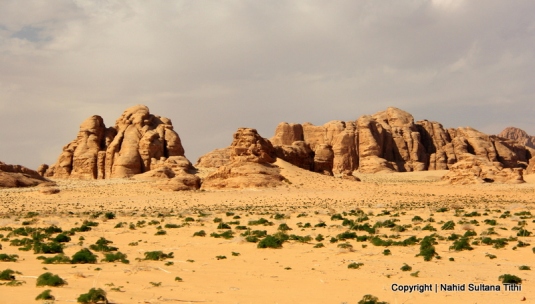 This makes a great day trip from Petra or Aqaba. Many people come to Wadi Rum for overnight or weekly camping. There are some designated areas where they can stay like the Bedouins, roam around in camels, horses, or donkeys, and eat meals prepared by the Bedouins in traditional style. Trekkers, hikers, and rock climbers come here to enjoy the tranquility of the boundless empty spaces. This place can also interest professionals like geologists, scientists, and historians. To the west, this became very well-known after the epic movie “Lawrence of Arabia” in 1962. It was also used as the surface of mars in the movie “Red Planet”.

Amazing landscape of Wadi Rum, Jordan – it does look like the surface of the moon

It took us about hour and half from Petra to reach Wadi Rum. We paid 150 JD (50 JD per person & my 3-yr was free) for all four of us for about 5 hours of stay in Wadi Rum. The price included the tour and Bedouin-style lunch. Our guide met with the Bedouin in a spot near Wadi Rum, not near the Visitors’ Center. So, we avoided paying the entry fee there. But usually tourists have to pay about 50 JD to enter the valley and pay separately to the Bedouins for tour and everything else. There are many options to choose from to explore the desert and they can be arranged by the Visitors’ Center or your hotel beforehand.

TIME of TRAVEL: We flew to Jordan in mid-February in 2013. Wadi Rum was our last trip there after Petra. It was slightly chilly in the city, but once we were in the desert…it was really pleasant. Try avoiding going there during summer…it can get crazy hot. Even most of the Bedouins move off the desert to elevated mountains in hot summer months. 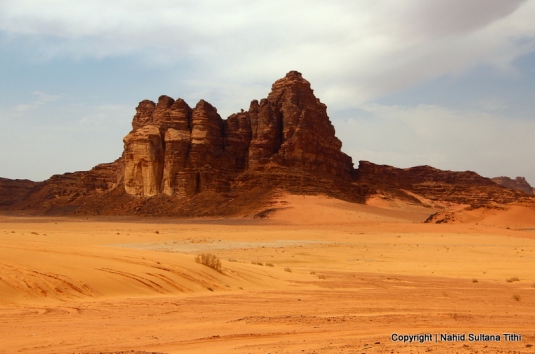 A nice afternoon in the desert of Wadi Rum, Jordan

OUR HOTEL: We stayed in Movenpick Resort in Petra, right outside the Visitors’ Center. I don’t think I need to say much about Movenpick, it’s a 5-star hotel…very luxurious rooms with excellent customer service. Wi-Fi wasn’t free but breakfast buffet, with variety of different items to choose from, was free for its customers. We checked out of the hotel in the morning and headed straight towards Wadi Rum on the last day of our trip and checked in Arab Tower Hotel in Amman at night.

PLACES WE’VE VISITED: Wadi Rum is a classic picture of sandy desert. Whole area is 280 sq. miles (780 sq. m.) of natural scenic site. Visitors can spend days or weeks exploring its mountains, hills, vast landscapes, sand dunes, many natural rock bridges, sandstone and granite rocks, Bedouin inhabitants, natural and hand-cut caves, inscriptions and petroglyphs, and many other wonders of nature and pre-historic time. Our Bedouin guide brought an old white 4×4 SUV to take us around the desert. Adventure is having your SUV stuck in the sand or taking a ride thru the empty path of desert without following any signs or paved road, and sliding down small sand-dunes with the vehicle. 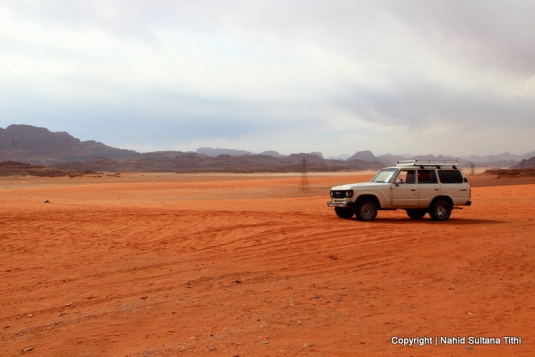 Our 4×4 transportation in the desert of Wadi Rum, Jordan

1) Mushroom Rock: This was our first stop in the desert. Our Bedouin guide has a small shop of his own and a place for tea and coffee (only open after dark) inside a tent. There is a natural rock formation close to the tent, looks much like a mushroom in a way. 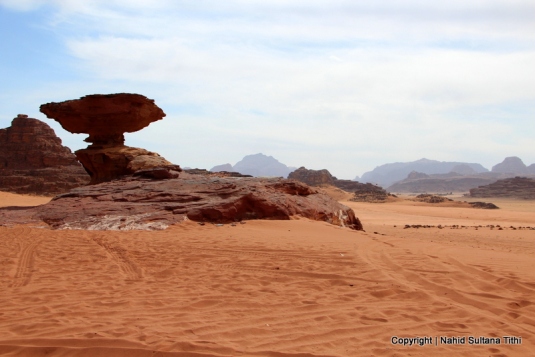 2) Seven Pillars of Wisdom: We saw this bold rock formation almost right after we entered the valley. The name came from T. E. Lawrence’s book although name has nothing to do with the valley.

This amazing columns of rock is known as Seven Pillars of Wisdom in Wadi Rum, Jordan

3) Caves and Lifestyle: Many natural and hand-cut caves can be found in Wadi Rum. Some of them are from the time of Nabataeans. We stopped at two of these caves (one from Nabataean period) where no one lives anymore.

One of many natural caves of Wadi Rum, Jordan

Another interesting thing he showed us was how Bedouins used to wash their hands or body in the old times before soaps were available. I don’t know the name of the plant, but he took some branches, tore them in small pieces, smashed with rock, added some water, and started to rub in his hands then bubble started to form…a natural anti-bacterial soap.

Our Bedouin friend is showing how they used to use plants to clean their hands in the old time – Wadi Rum, Jordan 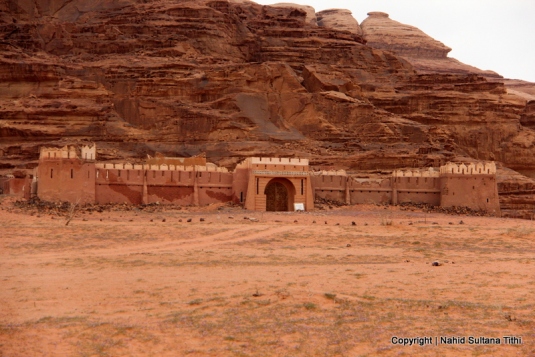 Castle that was built for the movie “Lawrence of Arabia” in 1962 in Wadi Rum, Jordan

5) Inscriptions on rocks: There are many sites in Wadi Rum where you can find etched inscriptions, paintings, graffiti, and petroglyphs. They are usually from Nabataean or Thamudic periods. We stopped at 2 places and climbed up small hills to see them.

Another natural bridge of Wadi Rum 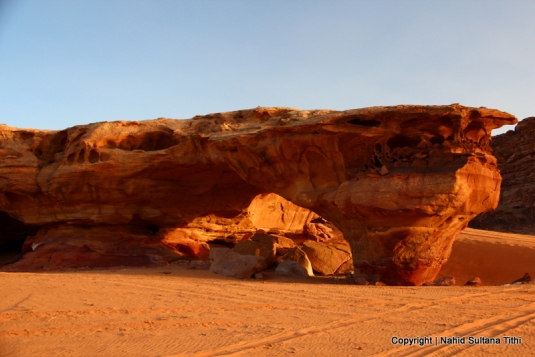 A stone arch in Wadi Rum

7) Our Lunch: After about 2 hours ride in the SUV with our guide and the Bedouin driver, we stopped at a nice picnic spot with awesome “backyard” view for lunch. The Bedouin had our lunch marinated and foiled beforehand.

Both of them collected some dry branches to cook the food on. Then lit up fire and placed foiled meal on it. It took about an hour to cook that chicken. In the mean time he put some Bedouin music in his radio-looking machine, placed small mattresses on the sand for us to sit or lay down, and put a pot of water on fire to have some tea after lunch.

Lunch is cooking on hot sand and ashes

It was about 4 pm when the food was ready. He had everything very well planned …brought some breads, yogurt, even a bottle of coke, and some disposable utensils for lunch. The smell and look of our lunch looked oh-so-good. The dish is called Madfouna…a chicken dish with potatoes, carrots, peppers, lots of lemon with salt and pepper. We sat on the mattress with our food in our hands and some sand on our food (couldn’t help it, there were some whirling sand around us, they kept flying on our plate). But either way, that food was delicious. After lunch, it was time for some hot tea. I never had sage tea before. Usually people here drink lots of mint tea. But he made some sage tea for us…tasted very refreshing in the hot desert. 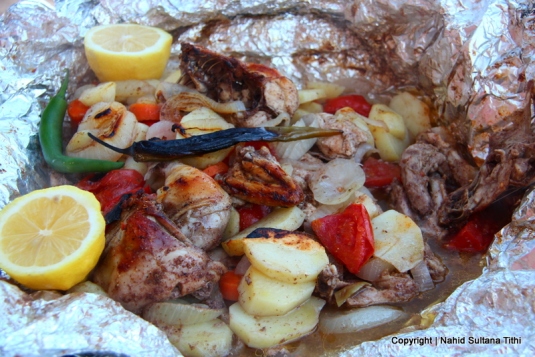 By the time we were done with our lunch it was about 5 pm and very close to sunset. On the SUV again and to the unknown…

8) Panoramic Site: This was the best part of the tour for me. The color of desert started to change its shades near the sunset time. Nature looked more mystical and astounding. Our Bedouin friend took us to a panoramic spot where we were amazed by the beautiful atmosphere. We were on top of a small hill surrounded by some sand dunes, a lower valley view, and uniquely cut rocks and hills. It was immense and boundless.

Sunset in a panoramic spot in Wadi Rum, Jordan

After all the traveling I did in my little life, Wadi Rum is the only place where I truly left my heart. I kept going back to its enormous and ageless place of beauty in my thoughts every now and then…thinking about miles after miles of its gratifying look. It truly felt like I was on the moon for the first time in my life.

Best sunset I have ever seen in my life was in Wadi Rum, Jordan

8 Comments on “Wadi Rum, Jordan – Journey to the moon”