DAY TRIP to MADABA, MT. NEBO, BETHANY, and DEAD SEA: This was a great day-trip to get out from hustling bustling Old Town Amman. We saw all the things that we wanted to see in Amman on our first day. 2nd day was kept for this trip which was booked thru Arab Tower Hotel/Al-Burj Arab in Amman. We rented a private taxi for 54JD for the whole day (entrance fee to the below places weren’t included in this fee). The driver spoke very little English but he was a friendly young man and could explain some histories on these places.

EATING and SHOPPING: We had lunch in a street-side restaurant in Bethany before entering the site. It was mainly bread, Jordanian style rice, hummus, salad, pickles, and kebab. It was nothing fancy but they had good food and clean bathroom. Food here, in these small villages, is very cheap; we ordered food for 2 adults and 2 kids but the bill was only around 14 JD…not bad at all.

For shopping, you must buy some hand-crafted mosaics when in Madaba. That’s what the city is famous for, but don’t just go anywhere…otherwise the only thing you will get is mosaics made in China. Go to the real factories and showroom in Madaba…they are plenty of them here. They not only have wide variety of mosaic artwork, but also you don’t have to worry about buying fake things and pay extra prices. You can tour the factory, then they will take you to their shop. These hand-crafted mosaics are not cheap. The artists work very hard making these items with hand and many of them take months before getting the final products. These showrooms also usually carry Dead Sea products (like salt, mud, lotion, soaps, and etc.) for much cheaper price than the stores in Dead Sea.

Hand-made souvenirs in the showroom of Madaba Handcrafts Center, Jordan

PLACES WE’VE VISITED: We left our hotel around 10 in the morning and headed straight towards Madaba. By the time we were done with Dead Sea, it was almost 5pm. The drive was very scenic thru the rugged mountains, stony deserts, some green valleys, and dramatic vast landscape. Look out for Bedouin settlements also, you will know they are Bedouins when you see tents in the middle of nowhere.

1) MADABA: This is a small city about 40 minutes south of Amman. The city itself dates from the Middle Bronze Age. Madaba is known as the “City of Mosaics” for its century’s old history of mosaic arts and designs.

Map of Holy Land from the 6th century inside Greek Orthodox Church of St. George, Jordan

a) GREEK ORTHODOX CHURCH of ST. GEORGE: This was our first stop of the day in Madaba. It is the chief attraction of the city which preserved the original piece of Byzantine-era mosaic map of “Holy Land” from 6th century on its floor. This 25×5 sq. m. map in front of the altar depicts some important details of that time, like hills and valleys, villages and towns of Jerusalem and other holy sites. The church itself is small but a wonderfully vivid and colorful place with many other mosaic wall-hangings and religious paintings. It’s 1 JD to enter the church.

Greek Orthodox Church of St. George in Madaba which houses the mosaic map of Holy Land from the 6th century

b) MADABA HAND-CRAFTS CENTER: As I have mentioned above that if you want to buy Madaba’s traditional hand-crafted mosaics then it’s better to go to a factory other than buying cheap, fake stuff from small shops on the streets. There are plenty of these government approved places here who will gladly show you around their factories and then bring you to their showrooms. Our driver/guide took us to one such place, called Madaba Hand-Crafts Center. All of the mosaic stones come mainly from the deserts of Madaba, Jarash, or Wadi Rum and they only use natural stone color to design each of their masterpieces. The man inside first showed us how they cut the stones into small square pieces, then how the artists first sketch a design on a piece of white cloth where later they glue the stone pieces one by one. Then it takes few days to dry the glue, after that it’s grouted on a frame upside down and finally, take the white cloth off the stones. It was quite educational for us and the kids. There were ladies who also paint on ceramics and clay pot and later give the mosaic-look on them. After that we walked over to the showroom. This was an incredible place and shoppers’ paradise for those who like collecting authentic and traditional artworks. They not only have furniture or wall-hangings with mosaics, but also very rich quality rugs, Bedouin jewelries, scarves, Dead Sea products, and many more attractive home décor souvenirs. And the good deal is that they can ship any big items to your city’s airport free of charge…all you have to do is just pick it up when it arrives at the airport. There were also some unframed mosaic works which you can take and grout them yourself on floors or kitchen walls. 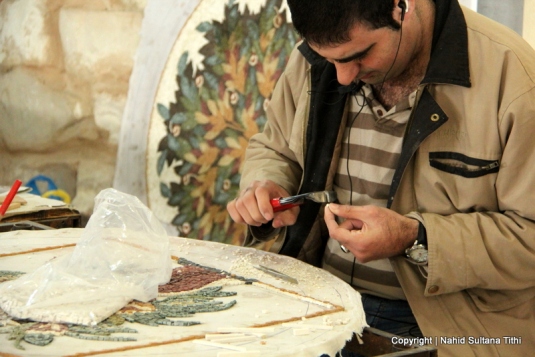 An artist cutting stones to make designs on a mosaic decor in Madaba Handcrafts Center, Jordan

2) MT. NEBO: After driving for about 20 more minutes from Madaba Handcrafts Center, we reached Mt. Nebo. This is a holy site for both Muslims and Christians. This is where Prophet Moses climbed at the end of his life to see the “Promised Land” which he never could enter. He also died and was buried here, although no one knows the exact place of his burial to this date. 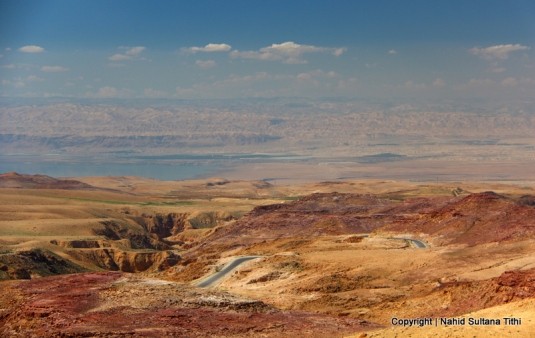 From the summit of the mountain visitors can see, as Moses did, the vast panorama of Jordan River Valley, the Dead Sea, Jericho (about 27 km), and Jerusalem (46 km). This place has been a place of pilgrimage for Christians for hundreds of years. The Serpentine Cross on the mountain is one of the most photographed sculptures of this place that represents serpent taken by Moses into the desert and the cross upon which Jesus was crucified. A big stone-statue marks the visit of Pope John Paul II in 2000 AD near the main entrance. 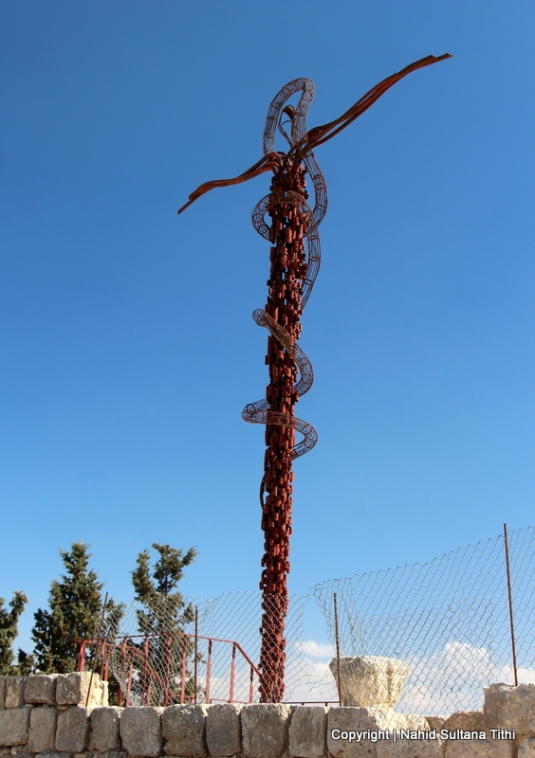 There was a massive renovation going on in the sanctuary for Moses when we went to visit Mt. Nebo. We only could see the original mosaic floors of Mt. Nebo’ first church from the 4th century along with some other old mosaic pieces and artifacts. Mt. Nebo is open from 8 – 4 pm and the entry fee is 1 JD per adult (kids free). You can easily spend an hour or more walking on top of Mt. Nebo looking at the near and far distance pretty sights.

3) BETHANY: After about another half an hour drive from Mt. Nebo, we reached the visitor center of Bethany. Bethany has been identified as a biblical site where Jesus was baptized. The exact point of baptism is known as “Bethany Beyond the Jordan” and this is the place where John was living when he baptized Jesus.

“Bethany Beyond the Jordan” – The holy site where Jesus was Baptized by John the Baptist in Bethany, Jordan

Three chapels were built on the eastern side of the river during the Byzantine period (5th – 6th century AD) with colored mosaic and marble flooring. These excavated remains still can be seen by the visitors in their original states. There are many beautiful churches in this area from almost each sect of Christianity. This is supposed to be a holy site for all 3 monotheistic religions. For Christians it is obvious…Jesus was baptized by John at this very spot and the doors to heaven believed to open here during Christ’s baptism. For Muslims, Mohamed (SAW) said to have crossed this place before going to Jerusalem before his Night Journey (Mir’aj) to the heaven. Finally, one of the hills here is believed to be the place from where Jewish Prophet Elijah ascended to heaven in a chariot of fire. Some portion of “Bethany Beyond the Jordan” is actually in West Bank. Therefore, we had to go in a gov’t shuttle bus and an escort to access the area. This whole trip is for 12 JD per person which also includes audio guide. The service is open from 8:30 – 5 pm and bus runs every half an hour. It takes about 10 minutes from the visitor’s center to go to the Baptism site and the whole tour is for about an hour. First we walked to the Jordan River, then walked another 5 minutes to see the baptism site “Bethany Beyond the Jordan”, and then another site of Jordan River where you can see the Palestinian border only few feet away.

4) DEAD SEA: Dead Sea is flanked by mountains to the east and the rolling hills of Jerusalem to the west, giving it an almost other-worldly beauty. This is also believed to have been home to some Biblical cities, like Sodom and Gomorrah. Either for religious reasons or to enjoy the calm surroundings of the place Dead Sea is a must-see and must-experience place in Jordan. Look on the other side of Dead Sea and you will see Jericho in West Bank. 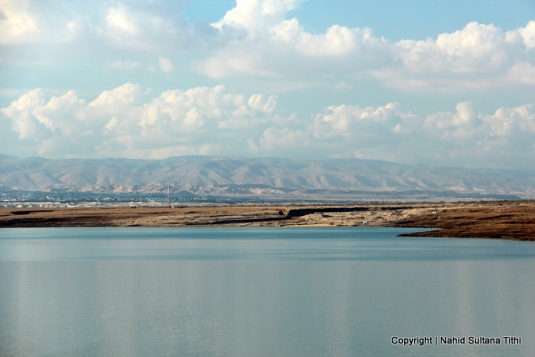 Dead Sea, Jordan…looking at West Bank on the other side

Dead Sea is not the place where people come to “swim”, you can only float on your back in this thick salty body of water. Amman Beach is the place where our guide was saying people pay to go inside for swimming, dining, spa treatment, and lot for things. Since we weren’t going to go for swimming and had little time left before sunset, we just went to a shore of Dead Sea which was free of charge and without any nice amenities. You can rent camels or horses for few minutes here to ride by the water. I saw people floating on their back in this beach too, but there is no shower to clean the heavy salt off your body. Please also visit my page on Dead Sea on the right-hand side under Israel/Palestine for more background information on this unique lake.