Masaya and Granada in Nicaragua 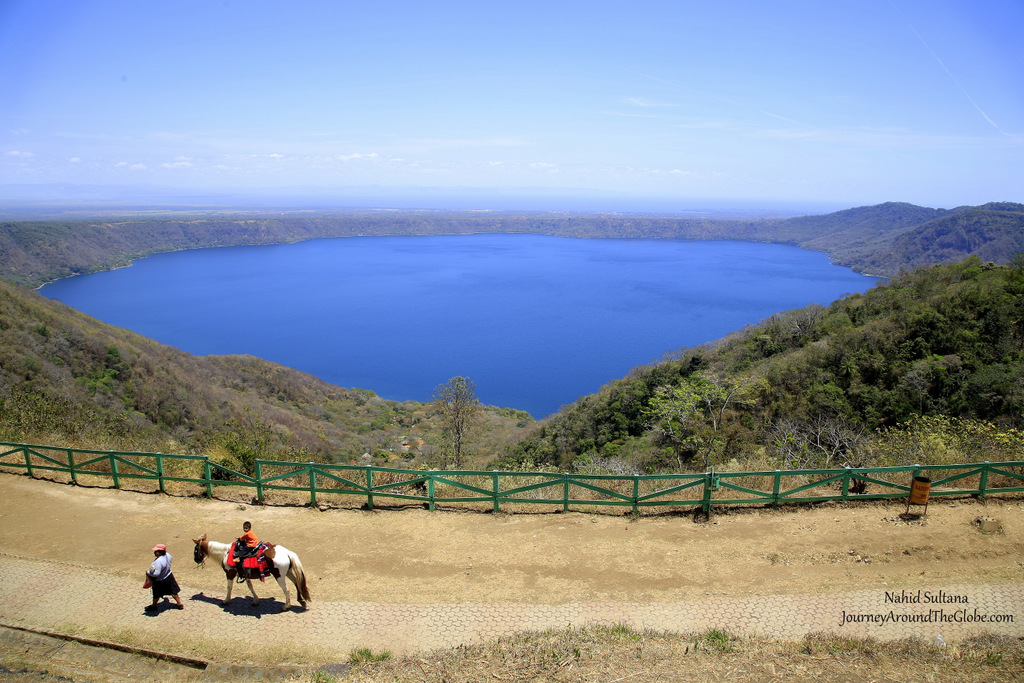 MASAYA and GRANADA, NICARAGUA: While Masaya is a natural beauty with volcanic rocks, crater, and mountains, Granada is a historic town with beautiful churches, colonial style architecture, and good food. Both are famous destinations and must-sees of Nicaragua.

How about some facts now? Nicaragua is the 3rd largest country in Central America. The country got its independence in 1821. By the time Civil War ended here in 1990, the country lost about 25,000 of its people. It had its first democratic election in 1990. Currently, Nicaragua is working on their own canal, Nicaragua Lock, to compete with its neighboring Panama Canal. It’s a $50 billion project by a Chinese company which should be finished in 5 years. Ruben Dario is the most famous poet of Nicaragua and you will see his statues and monuments in many places. 80% tourists of this country come from the U.S.A. … no surprise there.

Nicaraguan volcanoes form part of what is called the “Pacific Ring (or Belt) of Fire”. “Mombacho Volcano Natural Reserve” is a natural preserve in Granada, 41km from Managua, where we didn’t make a visit but highly recommended. Mombacho invites visitors to enjoy its beauty, rich history, and wonderful views. The preserve contains the only cloud forest on the Pacific Coast of Nicaragua. Hikers will find a great variety of birds and spectacular overlooks of Lake Nicaragua. The volcano is not currently active, but its fumaroles indicates that this giant’s heart of fire is still alive. One of the biggest earthquakes in Nicaragua was in 1972 that took 22,000 lives.

We booked Masaya and Granada day trip thru viator.com. It was a private tour with a professional guide. We were picked up from our hotel in the morning and were dropped off in the evening.

TIME of TRAVEL: After visiting El Salvador, Panama, and Costa Rica, Nicaragua concluded our Central America tour which we took back in March, 2015. We had two days to spare before returning to our home in Oregon. First day was well spent in Managua and last day was for Masaya and Granada. It was pretty hot and humid, but I guess not as bad as El Salvador. Still it’s always better to be prepared with lots of sunscreens, hats, comfortable shoes, and plenty of water bottle when you come to this region around this time of the year.

OUR HOTEL: We stayed in Holiday Inn Managua – Convention in Managua. This was a beautiful hotel with fancy restaurant, big swimming pool, nice rooms, and friendly service. First day, our hotel concierge arranged a cab-ride around the capital for few hours. The cost was $50 or 1350 NIC for this private tour in a cab. The hotel location was nice but not too close to the city center.

EATING and SHOPPING: After visiting Masaya, we had lunch in the center of Granada. “El Zguan” is a traditional Nicaraguan restaurant that serves typical local dishes in a very cozy sitting arrangements. They have great service and menu. I had tortilla soup for lunch with some fresh fruit juice. Try ceviche when you are in this region and other seafood and pasta. Overall, cuisine in Granada is very Moorish style, especially when it comes to kebabs.

Nicaragua offers variety of souvenirs to its guests. Hand-made clay pots, hammocks, wood-carvings are just to name some. Masaya and its surrounding artisan villages are known for their local traditions. They are very reasonably priced. You can bargain but every dollar you spend here, know that you are helping a family and to keep their culture and heritage alive.

PLACES WE’VE VISITED: Nicaragua has total of 50 volcanos and out of that, 7 are active. So, it will be unthinkable to leave the country without seeing a volcanic sight. Our tour started with a visit to Masaya.

1)     MASAYA: Also known as “City of Flower”, the town of Masaya is about 30km from the capitol Managua. Tourists mainly come here to visit the volcano, Parque Nacionale Volcan Masaya or Masaya Volcano National Park, from which the city got its name from. This is Nicaragua’s first national park, established in 1979. The park also serves as a memoir for the revolutionists who were thrown in the crater from helicopters/planes while they were still alive.

Masaya Volcano National Park, is a popular tourist site and one of the excellent parks of Nicaragua, featuring a smoking volcano. It is the most active volcano in the region. Masaya visitor center displays some of it historical and geological information and artifacts. The most famous and historical eruption (which was a pyroclastic lava) of the Masaya Volcano happened on March 16, 1772. It emitted an extensive flow of lava during several days, into the lagoon.

We drove by old lava flows while approaching the volcanic site. The guide took us to the visitor center and gave us bit of information on the park and Nicaragua’s other volcanic mountains before arriving to the craters. Visitors can take mule or horse ride or even hike Masaya Volcano to see the craters…just be careful.

There are total 5 craters in this area and out of these five craters, 250 meters deep Crater Santiago is still active. The last eruption from this crater was in 2009 with ash and water. Crater Nandiri is still covered with ash. Few vultures were roaming around over our heads for hunt. We saw the first holy-cross near Crater Santiago from 1529 A.D. built by the Spaniards. The national park is situated by Laguna de Masaya. Local villagers refine the lake water for different usages by using volcanic rocks.

From the volcanic park, we made a short stop at Masaya’s handcraft market, Mercado Artisano. This is a good place to get some gift items and souvenirs from Nicaragua. Make sure to bargain with the vendors. I even saw some artists working right outside their stores. Masaya’s handicraft market is well known for its variety of product at reasonable price.

From there we headed towards Nicaragua’s deep crater lake named “Apoyo”. Apoyo Lagoon is another beautiful gem in the Town of Catarina and is a popular attraction in the area. Apoyo Lagoon Natural Reserve is located about 8km south of the Masaya. Measuring 4 miles wide and over 656 feet deep, this stunning turquoise and crystalline lagoon is the largest crater lagoon and deepest natural well in Nicaragua. It occupies the crater of a volcano that exploded thousands of years ago. Standing here, you can see Mombacho Volcano on the right and Lake Nicaragua on the other side. Sit on one of the benches and enjoy the attractive view. You will find couple rows of souvenir, hand-craft shops and restaurants by the lagoon.

From Apoyo Lagoon to Granada, we drove by a small artesian village, called San Juan de Orient and made a quick stop in one of its many shops to look/buy some clay potteries and hand-crafts. These are all locally crafted, mostly by women, in this village or nearby places. These are very cheap yet gorgeous gift items to bring back home as memories and you will be supporting many artists and their families in the process.

2)     GRANADA: Granada is a very touristic yet cozy town with colorful colonial-style buildings, mostly dating back to the 16th or 17th century. From Masaya to Granada, it was about 15km drive and from Granada to Managua, it was about 45 km drive. By the shores of Lake Nicaragua, Granada is the oldest colonial town in the western hemisphere of the Americas or the first European city in the mainland America. Founded in 1524, obviously the name comes from Spain’s ancient city Granada. Therefore, lots of Spanish influences are everywhere in this town. Economically and politically, Granada is one of the most important cities of this country. This was also Nicaragua’s first capital, later which moved to Leon, and finally to Managua in 1852. While you are there, visit its colorful and picturesque churches. Mombacho Volcano can be seen from different parts of the town.

Much of Granada’s ancient landmarks were destroyed by the American filibuster William Walker who tried to rule Central America in the mid-1800th. Tourists can still enjoy some of the finest colonial-era architecture and historic churches. Our first stop was to Lake Nicaragua. Entrance was free because of the Easter holiday. This is a nice place for strolling or enjoying a late afternoon.

From the lake, we drove straight to the city’s downtown. The Gunpowder Fortress, built in 1748, could have been our second stop, but it was closed. Another site we couldn’t go in, was Church of Xalteva. The church was burned down by William Walker and was later restored in 1856. It was closed to the publics during our visit. We then walked to Iglesia de la Merced, a Baroque and Neo-Classical designed church with a simple altar. Built in the 17th century, this church’s façade and tower were also destroyed by William Walker. After restoration, visitors now can climb the tower for 25 NIC.

Next stop was San Francisco Church and Convent. This was William Walker’s stable at one point. It is the first church in Granada from 1529 and was built by the Spaniards. Although it’s not an active church, its vast collection of indigenous artifacts and basalt stone statues from Onetepe Island and serene cloister attract many visitors every year. Some of those items in display here are 800 years old and many are from B.C. era. Majestic Mombacho Volcano can be seen from here while standing on the terrace. It’s $1 to enter the museum and the venue is also used for events and weddings.

We then walked thru some small streets of Granada to come to House of the 3 Worlds. This is an art and music workshop place. Unlike a gallery, this is where artists come and work, give workshops, and sell their arts directly. We saw artists at work, chilling and chatting with other like-minded people. “Radio Volcano” is also stationed here.  The location hosts weddings and we saw caterers getting ready for a wedding for that evening.

On the other side of House of the 3 Worlds is Granada’s most popular spot, Plaza de la Independencia. The square is lined with mesmerizing old and colorful Colonial style buildings, shops, cafes, and food vendors. This is a collision of different architectural era and style from Classical Spanish (Palace of Music), Neo-Classical Baroque, and New Orleans (House of Bishop).  An obelisk and a beautiful fountain from 1925 Funete de la Ninos are couple of structures that adorn this hustling and noisy (in a good way) place.

Granada Cathedral in Plaza de la Independencia is a beautiful Neo-Classic Baroque architecture with a dome and two towers. It is simple but big. Visit the small chapels and the statues while in this cathedral.

Last spot in Granada was Iglesia Maria Auxiliadora which was built in the beginning of the 17th century. It is the most beautiful church in this city or probably in whole Nicaragua. With its Gothic exterior and Moorish interior, this Catholic church is only its kind in this country. It is small in size but anyone would appreciate its gorgeous wood-curved alter, intriguing ceiling, and sophisticated arches.

← Managua in a day
Guest Post – Get a Great Vacation: The Benefits of Staying in a Resort →

6 Comments on “Masaya and Granada in Nicaragua”