A day in Seville, Spain

SEVILLE, SPAIN: While Cordoba was the capital of old Andalusia, Seville is the current capital of this region. It is a famous Andalusian destination among the travelers for being a historic city that shaped Spanish culture and heritage. In the 16th century, Seville was the harbor chosen by Queen Isabel as it offered security against pirate attacks. She turned the city into the Port and Door to America. It was the European main commercial city during that time.

Old town of Seville is very beautiful and well-preserved. It offers sites and activities for all ages and tastes.

TIME of TRAVEL: After visiting Malaga, Granada, and Cordoba in February 2014, we came to Seville. It was about an hour and half drive from Cordoba to Seville. Driving in Andalusia was a fantastic experience since we got to see some clean highways, Sierra Nevada Mountains, countryside, vast fields of olive trees…overall a very scenic drive. Weather is mild during February… pleasant during day and a bit chilly at night.

OUR HOTEL: Our hotel in Seville was Hotel Petit Palace Santa Cruz, about 10 minutes of walk from the cathedral or Alcazar. We didn’t have breakfast included with the price but both the days we were there, we had breakfast in the hotel for 8 euros per adult, I think…and kids were free. Hotel has free Wi-Fi service. It’s an ultra-modern hotel with nice people and very clean rooms.

EATING and SHOPPING: After trying out loads of Spanish food, like paella and tapas in the other Andalusian cities in this trip, we were ready for some other types of cuisine. First night we walked about 20 minutes from our hotel just to get to a local Chinese restaurant. Next lunch was in the old town at an Italian pasta/pizza place. This Italian place was actually very nice with outdoor sitting and good food. And for the night we just picked up a box of pizza from the street on our way to the hotel.

Seville or may be just whole Andalusia is a great place to buy Spanish tiles or ceramic items. These artifacts are beautiful and usually hand-made by local artists. Flamenco dresses for little girls are very popular here. I also loved vibrant colors of Spanish potteries and ceramics.

PLACES WE’VE VISITED: We stayed two nights in Seville but had only a day to explore the main city; went to Gibraltar on the 2nd day. There are many historic churches and museums to visit here. If you go in the right season (April and May), may be you can catch a bullfight in Seville Bullring arena. It may not be for soft-hearted people, because they eventually kill the bull at the end. Another popular show for tourists is the famous Spanish Flamenco performance.  If you have spare time, try visiting Cordoba or other beautiful Andalusian cities. Also, Gibraltar (a U.K. territory) could be another unique place to visit from Seville…the drive is about 2 hours one way but worth a visit.

1) SEVILLE CATHEDRAL: First thing we saw on the first day of Seville was this cathedral. This is a grand and impressive edifice in the heart of Seville. Like Cordoba Cathedral, this was also once a mosque. Built in 1198 AD, this was Seville’s main mosque. Both the mosque and the minaret were built using bricks. Original Orange Tree Courtyard of the mosque was conserved and so was its minaret which today forms the lower two-thirds of the Giralda bell tower. Seville Cathedral is arguably the largest church in the world when compared using the measurement of volume.

In 1248, the mosque was turned into a cathedral, but it wasn’t until mid-15th century when the construction work began on this Gothic architecture. Unlike Cordoba’s Mezquita, it was completely changed to a Christian church without leaving any sign of being a mosque at one point. Later, Renaissance and Baroque styles were added in the next couple centuries. Despite the fact that Seville Cathedral contains all sorts of architecture styles from different era, this edifice is known to be the most extensive Gothic cathedral all over the world.

There is a small museum and courtyard before entering the actual cathedral. Once you enter inside, there are more than twenty chapels and countless oversized paintings. One of the highlights of this cathedral is that it is the final resting place of famous explorer Christopher Columbus’ remains along with his son Hernando Columbus’ tomb on the other side of this place. Walk around and on one side of Columbus’ tomb is the historic chapel of Santa Maria de la Antigua where another well-known explorer Ferdinand Magellan and his men prayed in an act of thanks after returning from the expedition of 1519. The voyage was formed with five ships and a crew of 234 men, but only 18 survivors returned in 1522.

La Giralda is the original minaret tower of Seville Mosque here. Now it is the bell tower of this cathedral that can be seen from almost any point of old town. Visitors can climb the tower for a panoramic view of the city. Enjoy and relax in the orange courtyard which has a fountain in the middle surrounded by many orange trees.

The square in front of the cathedral is very big and a nice place to hang out. You can hire horse carriage to tour the main sites from here. Have a drink in one of the cafes or buy souvenirs from the stores.

The cathedral recommends that you spend at least 90 minutes inside it to get the most of it. Ticket is 8 euros per adult.

2) PLAZA del TRIUNFO: Plaza del Triunfo is a lovely square in between Seville Cathedral and Real Alcazar. You can see many old buildings, beautiful statues, and plenty of open space in this square. Above all it was nice to walk under the sun and the crowd here.

3) REAL ALCAZAR: Not too far from the cathedral, Real Alcazar stands on the oldest archeological remains of Seville. It was built in the 10th century over the remains of an Islamic quarter. Since then, between its ancient walls many highlights of the Spanish history have taken place. Built mainly in Moorish style, you can see almost all the architectural styles of Europe in this palace including Taifa, Gothic, Mudejar, Renaissance, Baroque, Mannerist, and Neo-classical. The Royal Alcazar is a harmonious combinations of art, history, and culture. Gothic Palace of Royal Alcazar is a palace that was built in 1284 representing the triumph of Christian ideology against the Muslim past.

Make sure to visit the historic Admiral’s Hall where Amerigo Vespucci, Ferdinand Magellan, and El Cano planned their first travel around the world and Juan de al Cosa made the first world map in history. The hall is decorated with historical theme paintings from the 19th and early 20th century. Today it is used as a conference room. As you come out from this hall and in the courtyard, take the majestic staircase to upstairs. Small museum with collections of old Spanish tiles from 16th century, Baroque and Renaissance ceramics, traditional hand-fans, Upper Palace of Alcazar today is the official residence of Their Majesties of Kings of Spain in this city. 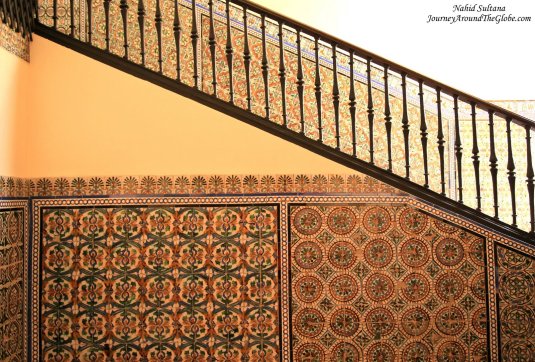 A majestic staircase of Real Alcazar of Seville, Spain

Main and magnificent attraction of Alcazar is the Moorish palace. It is the most fascinating place to visit in Seville with extravagant architecture, arched doors, lavishly decorated walls with calligraphy and Spanish tiles, handsomely carved ceilings, courtyards with lush gardens, and small ponds. Walk and appreciate many small but elegantly finished rooms. Visit Hall of Ambassadors which was the main hall of the palace and was used as a throne room. The central courtyard with a rectangular water fountain is the most appealing spot here. You get a glimpse of how Muslim royals and Christian emperors lived here many centuries ago. 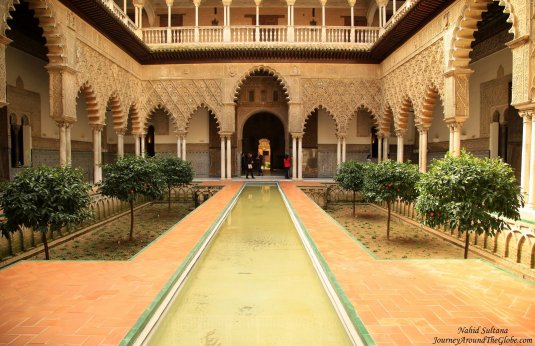 The most beautiful courtyard with pool of Real Alcazar in Seville, Spain

Since its creation, Royal Alcazar has always been the official residence of the Spanish Heads of State and today it is the oldest Royal Palace of Europe still in use. Now it is part of UNESCO World Heritage Site. Enjoyed its gardens, patios, fountains, old gates, and walls.

4) PLAZA de TOROS DE SEVILLA (SEVILLE BULLRING): This is one of the most visited monuments of Seville. We walked quite a long way from the city center to come here. This white and yellow building is an eye-catching rare beauty of Seville. Built in 1761 AD, the style is late Baroque with neo-Classical touch. Over the years, this bullring has transformed into one of the models of Bullfighting art evolution. In 1983, it was declared as a Historical Art Monument.

Seville Bullring – one of the famous bullrings of Spain from 1761 AD.

We started our tour with the stadium first. The arena can hold about 12,000 people. You get to see Prince’s Balcony which is only used by the Royal Family. Tickets for bullfight are sold somewhere from 25 euros to 150 euro depending on the location of the seats. 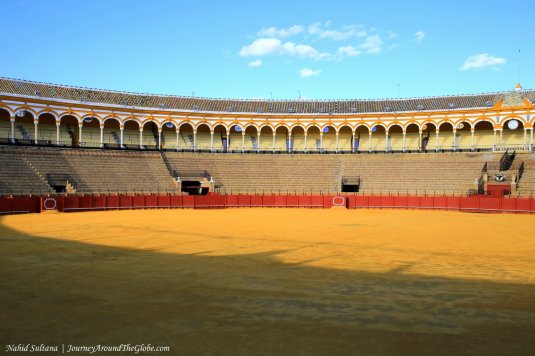 After visiting the stadium or the ring (visitors can’t really go to the field) we were taken downstairs to the Bullfighting Museum. This is an excellent place to know the history and evolution of Bullfighting in Spain over the ages. The museum features many bullfighting arts and paintings, 20th century bullfighting which is known as the “Golden Age of Bullfighting” and two most outstanding figures of bullfighting. The last section of the museum has images of games and matadors, bull fighters clothing, utensils, posters, capes, bronze sculpture, and lots more. In each show there are 6 bulls and 3 matadors. Whole show lasts for 2 ½ hours. Each matador faces 2 bulls. Now a days, the winner could make 350,000 euros per show!! High season to watch one of these games would be in April and May. 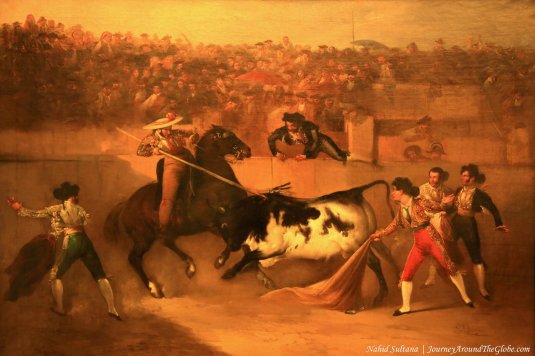 After that the tour continued with the Art Gallery, Bullfighter’s Chapel, and the Horses Courtyard. The Art Gallery has a collection of oil paintings from the 18th, 19th, and 20th centuries. All these paintings are work of Spanish artists. You can learn about the culture of bullfighting in Spain from this guided tour. The lady explained us how the game is played, rules, history, famous matadors, and etc…overall, we got to hear some fascinating facts on this sport. But I must say, after visiting this museum, I thought this was a serious cruelty towards those innocent animals and I don’t think I would ever pay my money to see such shows no matter how traditional it is in Spain.

Seville Bullring Museum, the front statue shows how mules pulls away bull after it is killed in a bullfight

Seville Bullring is accessed only by guide tours which are given in Spanish and English (French and Italian are available upon reservation). The duration of this tour is about 40 minutes. Tours run every 20 minutes but they run out of seats very quickly. Ticket for this tour is 7 euros per adult and 4 euros for 7 – 11 years old children.

5) TORRE de ORO: This is very close to the bullring and near the river. We took a leisure stroll by the river towards this tower after visiting Seville Bullring. This is a 13th century tower that now houses maritime museum. We didn’t go inside the museum but the area is very lovely to relax and to enjoy the atmosphere. 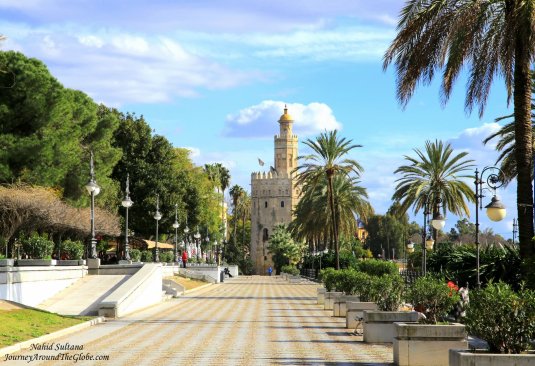 3 Comments on “A day in Seville, Spain”