STRATFORD-UPON-AVON and GLOUCESTER CATHEDRAL, ENGLAND: One of the greatest poets and playwrights of all time William Shakespeare’s home, Stratford-Upon-Avon is a historic town on the River Avon. Rich in culture and heritage, history of Shakespeare can be found at every corner in this town. Many old half-timbered houses make this medieval town a cozy tourist destination. Come in summer to see beautiful blooms around here. Center of the town is very attractive and well-preserved.

The city is very compact and easy to cover all the major sites on foot. Parking is easy here too. There is a big parking structure only 2-3 minutes of walk from Shakespeare’s Birthplace.

TIME of TRAVEL: We took a Baltic Sea cruise from Dover, England in August 2013. This gave us a nice opportunity to visit some of the outstanding places of this country. It was a nice day when we went to Stratford-Upon-Avon to walk around the old town and be charmed by Shakespeare’s legacy.

EATING and SHOPPING: Stratford-Upon-Avon has tons of shops in the old town. You will find many boutique and souvenir stores all lined up in the pedestrian zone close to Shakespeare’s Birthplace.  Many cafes and restaurants are there from quick snacks or meal to some sit down nice places. For our lunch, we picked up some pastries and meat pasties from a local vendor while walking towards Hall’s Croft. I am not so much into fish ‘n chips, I would rather have an English meat pasty anytime of the day.

PLACES WE’VE VISITED: It was kind of a weird day for us the day we visited Stratford-Upon-Avon. We stayed at my husband’s old school friend in Cheltenham and both of our girls decided to not come with us and stayed back in their house (even my 3 years old baby). I was a bit worried, since I knew we will be gone for good few hours. But after many years, I finally remembered again how it was to travel without a stroller and little kids…it was nice not to constantly think about if the children are tired from long walk or that we have to sit down for even a small meal. I did miss my girls though, but nice to be just by ourselves and enjoying a worry free day. For this reason, we were actually done visiting the following places within just couple hours, which was fantastic.

If you can manage and have time make sure to enjoy a Shakespearean play in prestigious Royal Shakespeare Company or any other theater in the town. But be sure to buy the tickets ahead of time, they are in high demand.

1) STRATFORD-UPON-AVON: Explore the birthplace and family home of the world’s most famous writer William Shakespeare in this little lovely town and wander through beautiful Shakespearean gardens. Then take time out to enjoy a chapter from the remarkable stories of William Shakespeare, the greatest playwright of all time. Complete the trip with a visit to the childhood home of William’s mother at Mary Arden’s House and the neighboring Palmer’s Farm, to the first home of Williams’s wife at Anne Hathaway’s Cottage, to his daughter Susanna’s married residence at Hall’s Croft, and to the site of his final home at New Place and Nash’s House next door.

14.95 GBP pass includes Shakespeare’s Birthplace, Nash’s House and New Place, Hall’s Croft, and Shakespeare’s Grave. You can add Mary Arden’s Farm and Anne Hathaway’s Cottage and Garden in this list for 22.50 GBP. We took the first package which took us about few hours to visit everything leisurely. I heard the garden with Anne Hathaway’s Cottage is very romantic and serene. She lived here until she was married to the poet. I would recommend taking the whole package if you have a full day in your hand.

a) BIRTH PLACE of SHAKESPEARE: This is where the journey of Shakespeare – his Life, Love, and Legacy starts. After passing a statue of “Jester” we reached the entrance to his house. We saw 3 videos before entering his house, giving a brief story of him and his family. The design of the house where he grew up followed a traditional plan with ground floor being his father, John Shakespeare’s, service shop area and a central hall. You can see William’s father’s workshop here where he earned a living in making designer leather gloves and purses. Above were bedchambers and attic rooms. Kitchen and brew-house were separate from the house.

The house where poet Shakespeare was born in Stratford-Upon-Avon, England

The birth-room window which was formerly in the birth-room of Shakespeare’s birthplace, became a place for the pilgrims to etch their names into the glass as a symbol of their visit. Princess Diana visited this place in 1992 along with many other royal pilgrims at different times like Queen Elizabeth II, King and Queen of Nepal, Princess from Japan.

We discovered the bedchamber and birth room of William Shakespeare upstairs of this house. Thick clothe wallpapers cover all the walls of this house giving the whole house a rich look. His birth-room gives a nice view of the garden in front. This house later became a guesthouse. 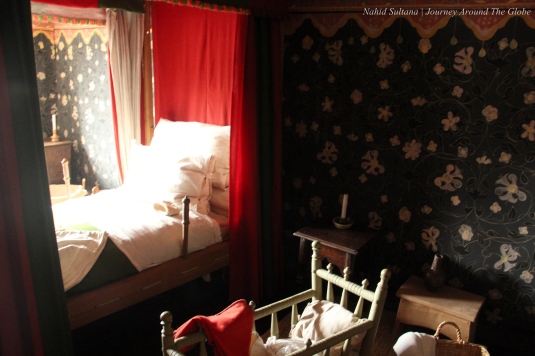 Go down the old stairs and get out to the garden. There was a play of Shakespeare going on with few audiences. If I am not wrong, I think you can request a play to the artists and they will do a specific chapter from Shakespeare’s book and perform it in front of you instantly. To my surprise, I found a bust of famous writer Rabindranath Tagore in the garden. Tagore was another world-renowned poet/writer and Noble-prize winner from Calcutta, India. He wrote most of his poems, novels, and songs in Bengali which were later translated in many different languages. Bengali being my mother tongue too, it made me feel pretty good seeing this familiar face in the garden where his bronze bust was the only one sitting boldly.

b) NASH’S HOUSE and NEW PLACE: This half-timbered house was owned by Thomas Nash from the early 17th century, who was married to Shakespeare’s only granddaughter and last direct descendant, Elizabeth. The house later was passed on to her on Thomas’ death. The big room in the lower level contains some fine pieces of furniture of the kind that would have been seen in Williams’ home next door. These include a richly carved dining table and the open shelved court cupboard with floral pattern displaying some early ceramic jars and jugs. This is a nice place to see some outstanding furniture and paintings, a fascinating exhibition of archeological finds from New Place. 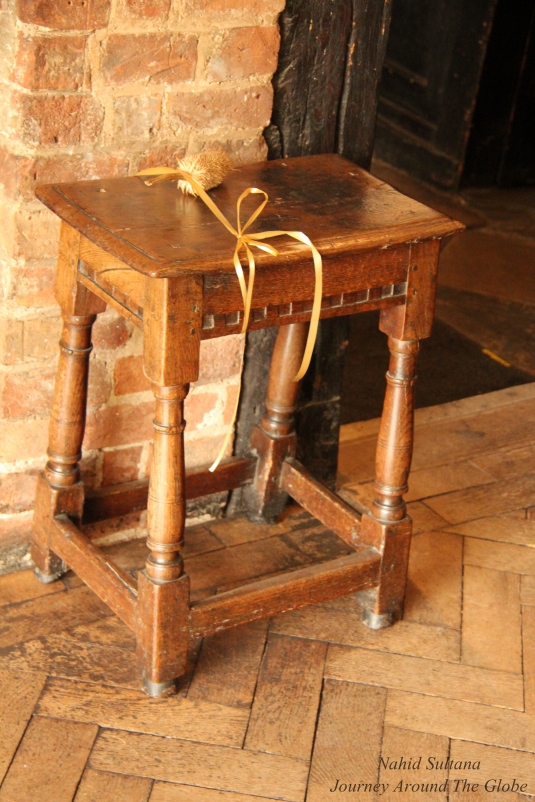 A chair inside Nash’s House which is originally from Shakespeare’s mother’s place. So, the poet probably sat on this chair in his lifetime

The house next to Nash’s House was the site of New Place which was bought by Shakespeare in 1597, before he was halfway through his theater career. This was one of the largest houses in town at that time. It was during this time that Shakespeare wrote some of his greatest works. Here he lived with his family and later died under this roof in 1616 in 52 years old. His daughter Susannah inherited this house after William’s death and later Elizabeth. When Elizabeth died in 1670, Shakespeare’s direct family line ended with her, leaving no one to inherit New Place.

We finished this visit by exploring the beautiful garden outside, called The Knott Garden. It truly is a beautiful place with many flower beds and bronze statues depicting different characters from the writer’s famous plays.

A statue depicting Shakespeare’s “A Midsummer Night’s Dream” in the garden of Nash’s House and New Place in Stratford-Upon-Avon, England

Nash’s House is about 5 minutes of walk from his Birthplace.

c) HALL’S CROFT: About 10 minutes of walk from Nash’s House and New Place, this is the house where Shakespeare’s daughter Susannah lived with her husband Physician John Hall. The house dates from 1613. It’s furnished to reflect the taste and affluence of someone of John Hall’s status in those days. A finely carved 17th century armchair and draw-leaf dining table, stone fireplace, a group family portrait are some of the outstanding displays of this house.

d) GUILD CHAPEL: The Guild Chapel, founded in 1269, is a chapel and school behind Nash’s House and New Place. This chapel has played an important part in the life of Shakespeare and was without doubt one of the buildings particularly familiar to him. It is believed that he studied in the grammar school of this chapel for a while at early childhood ages.

e) HOLY TRINITY: This is William Shakespeare’s burial site and also where he was baptized. It’s an ordinary small church but lots of admirers of the writer come here to see his final resting place. The poet died at 52 years of age in 1616. William and his family’s tombs can be found in front of the high altar of the church and you can see the stone bowl where he was baptized from along with the registration of his birth and death.

The stone bowl which was used to baptize William Shakespeare in Holy Trinity Church in Stratford-Upon-Avon, England

Historically, there has been a church on this site since the time of Saxon from 713 AD. The present building dates from 1210, with the oldest sections being the tower, transepts, and nave pillars.

There is a cemetery surrounding Holy Trinity Church. It’s a quiet place to relax and sit down. Another 10 minutes of walk from Hall’s Croft will take you to the entrance of this church. It is an active church where services still take place, so it is advisable to be respectful when any event is taking place. Entry is free here but donations are accepted. 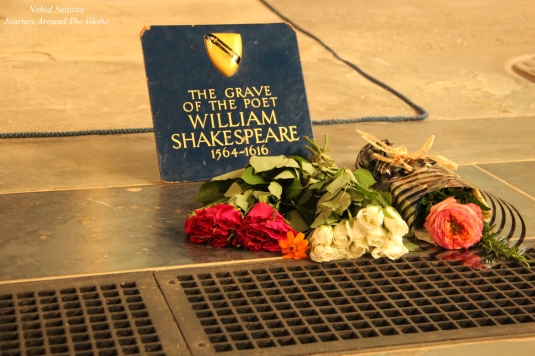 2) GLOUCESTER CATEHDRAL: This cathedral was suggested by my husband’s friend who lives in Cheltenham, U.K. The cathedral is in Gloucester County, mainly known as one of the locations where the movie Harry Potter was shot. Historically, this is a 1300 years old cathedral and an active place of worship. This used to be a monastery once where monks lived and prayed many centuries ago. Beautiful stained glass windows, pretty cloister, typical English style altar, grand organ, pattered ceiling, and floors with biblical pictures are all part it. East Window of it is as big as a tennis court and is about 700 years old. Among many others, King Edward II was buried here inside the cathedral. 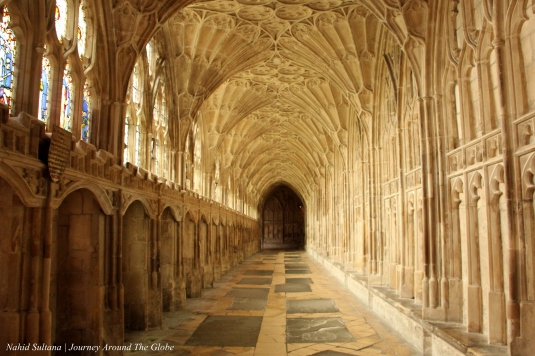 There are no information boards but the hallway/corridor near the cloister was the exact place where small scenes of Harry Potter were shot. We missed the “Harry Potter” tour in the morning that gives all the details on how the movie and this cathedral are related. It’s free to enter the cathedral but have to pay 3 GBP to take pictures inside. Visitors can climb the towers with a guide few times a week.

Cloister of Gloucester Cathedral in England

← Mysterious Stonehenge and the ancient city of Bath in England
Travel Theme: Multicolored →