MONTPELLIER, FRANCE: Montpellier is a nice cosmopolitan city in the Languedoc-Roussilon region in southwest France. We spent about few hours in the city center before heading towards Andorra the next day. We rode their bright yellow and red trams twice on our way to city center and coming back from there. The fare is cheap and they run very frequently every hour.

TIME OF OUR TRAVEL: We were traveling in the 1st week of October, 2012. It was still pleasant there with some sun during the day time and little bit chilly after evening.

OUR HOTEL: We stayed in Quick Palace Montpellier here which was about 10 minutes’ drive from the airport (in St. Jean De Vedas) and surrounded by lots of other hotels and many restaurants. The tram station is within walking distance from here which takes you directly to the city center, Place de la Comedie. 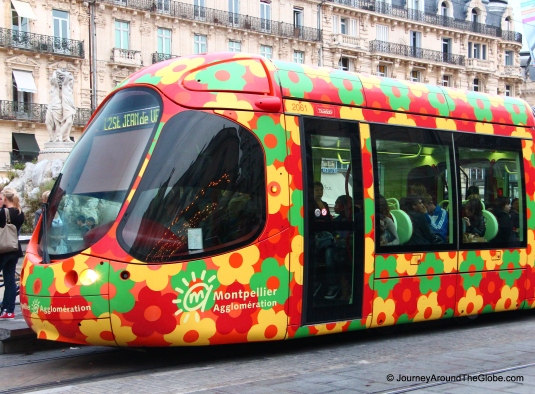 PLACES WE’VE VISITED: We barely spent few hours in Montpellier. We reached Montpellier airport around noon, then checked in at our hotel, ate something, and off to catch the tram to the city center. Visited all the places on foot from there but had to head back to hotel early since the girls were REALLYYY tired by the evening after a long day.

1) La PLACE de la COMEDIE: This is the number one hot spot and a must-see in Montpellier. This oval-shaped square, dominated by the Comedie opera house (built in 1888), is one of the largest pedestrian areas in Europe. Saturday market here makes this place even crowded during weekends. This lively place is packed with many shops, cafes, old & beautiful buildings. The nearby small streets are great for shopping and taking strolls. Take a walk thru Rue de la Loge, which is probably the busiest street there with all sorts of designer and local shops. The tram station is also right there very close to the plaza. 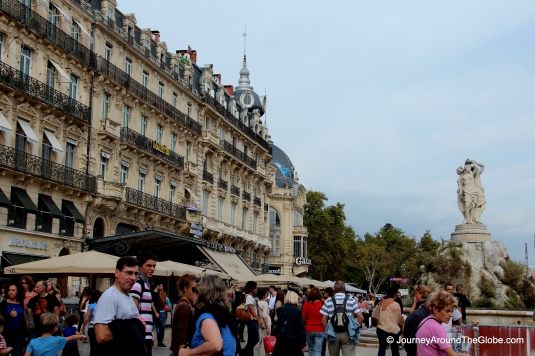 Place de la Comedie (Les 3 Graces can be seen on the right) in Montpellier, France

The center fountain of this plaza, called Les 3 Grâces, is one of the emblems of Montpellier. Created in 1773, the original marble statue is now located in the hall of the Comedie opera house.

2) ARC de TRIUMPH: This is only 10 minutes’ walk from Place de la Comedie on Rue Foch. At the end of the 17th century, this triumphal arch, a copy of the gates of Paris, was erected to honor King Louis XIV where one of the gates of the ancient rampart used to be. The Arc is adorned with medallions celebrating the highlights of the monarch’s reign. Ask at the Visitor’s Center for a tour of the Arc de Triumph.

3) PLACE ROYALE du PEYROU or PROMENADE de PEYROU: This is on the other side of Arc de Triumph behind a gate. This historical landmark sight of Montpellier provides the setting for the mounted statue of Louis XIV on his horse forming a remarkable group of monuments, with the Arc de Triumph, Water Tower, and Saint-Clement aqueduct. The magnificent panoramic view of the surrounding countryside has been exceptionally well-preserved since the late 17th century. The design of this esplanade was inspired by today’s Place de la Concorde in Paris. Two rows of trees were planted in the 19th century to form beautiful side paths.

After passing the statue of King Louis XIV in Place Royale du Peyrou, comes aqueduct Saint-Clement. Built in 1754, it supplied drinking water from the springs in the town of Saint-Clement. You can climb up the stairs to see Chateau d’Eau from the top. Created at the same time as the aqueduct in the 18th century, the water tower held the city’s water reserves.

4) FACULTE de MEDICINE or L’ECOLE de MEDECINE: Built in end of the 12th century, this is one of the OLDEST operating MEDICAL schools in the occidental world. Visitors can go inside the building for tour but have to book the ticket from tourist office ahead of time. It is located on one side of St. Pierre Cathedral.

Faculte de Medecine, one of the oldest medical school in the world, in Montpellier, France

5) SAINT PIERRE CATHEDRAL: This is a historical cathedral of the city from the 14th century with beautiful bold façade. The two circular columns that support this massive and dominating structure give this the effect of a medieval fortress.  The monumental porch, the bell towers, and the single nave are the Southern Gothic style. There was a huge renovation going on in front of the cathedral, so we really didn’t see the front view. From outside it looks like it was squeezed in between some buildings and narrow streets but inside is actually very big and nicely decorated with large paintings, old furniture, small pretty chapels, and a huge organ in the back. Finally, there is no fee to enter the cathedral.

6) TRIP TO ANDORRA: Andorra is one of the smallest countries in Europe and also one of the most unique countries I’ve ever seen so far. The whole country is situated on many giant mountains and its beyond just beautiful every direction you look at. 99.9% of the hotels you book here will have gorgeous mountain views. Andorra le Ville is the capital of this country and because it’s a tax-free country, Andorra is a shopping paradise for everyone. 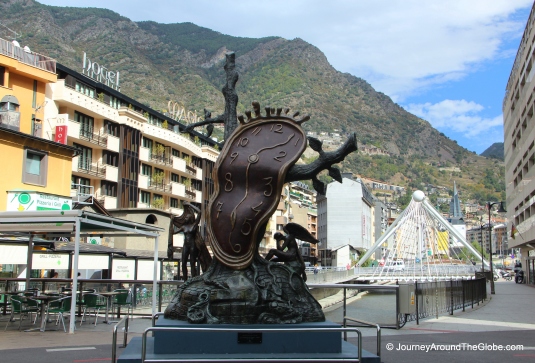