Day trip to former capitals of Lithuania – Karnave and Trakai

KARNAVE and TRAKAI, LITHUANIA: Visiting Karnave and Trakai was a tempting day-trip for us during our trip to Vilnius, Lithuania. Both of the towns were so close to Vilnius that we decided to get out of the capital for a day and enjoy some suburbs time.

A howling iron wolf – an official symbol of Lithuania

Karnave is about 35 km NW of Vilnius. This was the first capital of Lithuania. It was a trading city back then. But unfortunately the city was badly destroyed by the Germans crusaders and then Lithuanians themselves (to defend) in the 14th century and was never rebuilt. Now it’s enlisted in UNESCO World Heritage Site.

Trakai was Lithuania’s former medieval capital when Grand Duke Gediminas moved it from Karnave sometime during 14th century. It was first mentioned in the history in 1337. This small town is well known for its many different inhabitants like Lithuanians, Jews, Poles, Russians, Tatars, and Lithuanian Karaim (an intriguing Turkish speaking offshoot of the large Judaic Karaim movement who arrived in the town at the end of the 14th century and who are currently on the border of extinction). The city is about 28 km from Vilnius and is a lake district with 5 beautiful water bodies. I am happy that we took this tour…makes a perfect full or half a day trip if you are in Vilnius.

Thanks to our hotel who helped us to book this trip through a company, called Vilnius City Tour (vilniuscitytour.com). It was a private tour just by ourselves along with a driver and a great guide, Asta. We were picked up from our hotel around 9am. After visiting Karnave, Trakai, and some portion of Vilnius old town, we were brought back to hotel around 6pm. It cost us about $400 (290 euros or 1000 LTL) for our family of 4 (2 kids: 7 and 3 years old). Lunch wasn’t included here but we didn’t have to pay any entrance fees in anywhere.

TIME of TRAVEL: We visited Lithuania at the beginning of November 2013. It was not-so-great day when we took this trip. It was very cold and definitely cloudy at the beginning. Up to Karnave, the weather was fine…just had to deal with the cold. But when we were in Trakai, it started raining. But we still managed to visit the Trakai’s castle but if the weather permitted we would have had great time by the lake too.

OUR HOTEL: We stayed in Hotel Atrium in old town of Vilnius. Please check the “Our Hotel” section in my page on Vilnius under Lithuania.

EATING and SHOPPING: I didn’t find many shops or restaurants in Karnave but Trakai was a good place for some local souvenir hunt. Along the side of Lake Galve where Trakai Island Castle is located, there are lots of outdoor vendors who were selling variety of different trinkets. There were many cafes and restaurants by the lake too. We had lunch in a lake-view restaurant, called Bona Pizzeria…enjoyed the stunning view of the castle from our table as well as good food. They had pizza and pasta for the kids and soups, salads, and some Lithuanian dishes for our adult taste buds.

One thing that you just have to try in Trakai is kibinai. It’s a meat pastry which is Karaim (a minority tribe in Trakai) specialty. You can find kibinai in Vilnius or other towns in Lithuania, but Trakai is the where you can find it in its best form.

PLACES WE’VE VISITED: This was a day trip we took from Vilnius. First we were taken to Karnave and spent about couple hours there. Then our guide took us to Trakai. Here we spent about few hours too including lunch. We were done with these two places about 3pm. Our last destination was Vilnius where she showed some sites that we didn’t cover on our own. Please visit my page on Vilnius to see all the places we’ve visited there.

1) KARNAVE: As I mentioned before this was Lithuania’s first capital and a very historic place. It was very quiet that day, I think we were the only tourists there and it was the weather to blame. Overall, there aren’t much to do or even see in Karnave, at least not around this time of the year.

Church of Saint Mary of Scapular was built in 1920. We didn’t go inside the church but our guide did take us to a gated area where church Father lives to show us a memorial for Jerusalem and a man-made lake in the shape of Lithuania’s map. At one side of the church, there are some ruins of an early church (mainly some bricks/stones where the original nave used to be) from few centuries ago in the 15th century.

Church of Saint Mary of Scapular in Karnave, Lithuania

You can see River Neris flowing at a distance when standing behind the church and in front of the mounds. It’s a beautiful valley and very historic place for this country. As we were standing behind the church and facing the mounds and River Neris, left mound, called Mindaugas Mound, was where Lithuania’s first and last king, King Mindaugas was crowned. Out of total 5 original mounds, you can see 4 of them. We climbed on two mounds and let me tell you, view from there is just too pretty. During summer, big festivals and events take place on these mounds.

Historic mounds of Karnave in Lithuania

We were done with Karnave in about less than 2 hours, then headed towards Trakai.

2) TRAKAI: From Karnave to Trakai the distance is about 25 km. This is mainly a lake resort area and a perfect holiday place during summer. It started raining when we got off the coach in Trakai and walking towards the castle. But I could imagine how beautiful it probably looks in the summer months. I am sure visitors at that time can enjoy the waterscape and expanse of lakes everywhere in Trakai.

The main attraction of Trakai other than the lakes is Trakai Island Castle which was the residence of Vytotus the Great. This grand and romantic castle ruins of Trakai attract major tourists in Lithuania. Sitting quietly on Lake Galve, construction of this Gothic masterpiece started in the 14th century. The castle was damaged and eventually abandoned in 1655 after a war with Muscovy. Ironically, it was during the Soviet occupation of Lithuania that the castle was eventually restored to its former glory.

We crossed a footbridge and walked little more to reach the main entrance to the castle. Two main structures of this castles are the defensive outer and the Ducal Palace. Upon entering to the main front courtyard, you can see beautiful fortress of red bricks in all three sides. Trakai History Museum is spread around the castle and linked via many arrays of wooden steps and dark spiral staircases. Soldiers’ barracks, Great Hall, and other small rooms are filled with some original furniture, decors, ceramics, potteries, and etc. Though Trakai Island Castle looks more like a fortress than a palace, there are bedrooms of kings and queens that you can visit. 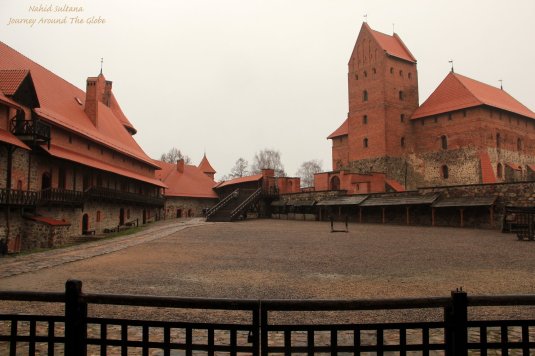 Inside Trakai Island Castle in Lithuania

A collection of items were dug up in the vicinity of the castle, such as a huge collection of coins. Some explanations in the castle are in English, but mostly they are in Lithuanian and Russian.

← Bloody history and current look of Vilnius, Lithuania
One of my favorite capitals in the world – Edinburgh →