PLOVDIV, BULGARIA: Plovdiv is one of the oldest towns in Europe, dating back to more than 4000 years BC. Old town of Plovdiv lies on a natural elevation…mostly few hills. Visitors can walk through different historical ages, see ancient buildings, and feel the spirit of this lovely town. Many well-preserved remains survived from this flourished town, liked old buildings, paved streets, fortifications, walls, water-supply, and sewerage. 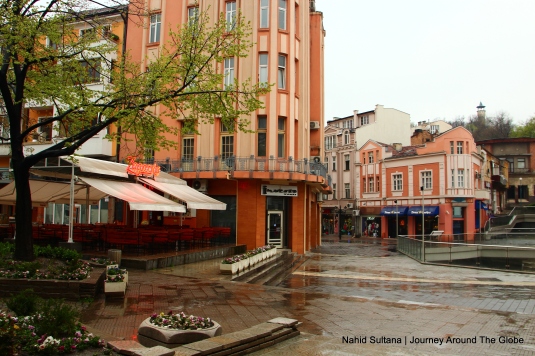 There weren’t many tourists during our visit. But this is one of the popular destinations near Sofia and makes a great day-trip if you are up to get some charming ancient taste.

TIME of TRAVEL: We chose a bad day to visit Plovdiv. We visited Sofia during the Easter Break of 2013. The weather forecast said it would rain little bit…but darn it. It was drizzling almost all and was raining heavily in the late afternoon. We were all wet and cold, especially when we had to wait for our amateur guide to bring the car (he lost the way and couldn’t find us…ugh) to pick us up. We weren’t prepared for that weather at all.

EATING and SHOPPING: There are few nice restaurants in old town of Plodiv. We had lunch in a restaurant, called “Phillippopolis” which is itself a historic building of the town with an art museum on the upper floor. The restaurant serves traditional Bulgarian dishes along with some infusions. Every dish we ordered was fan-tabulous. 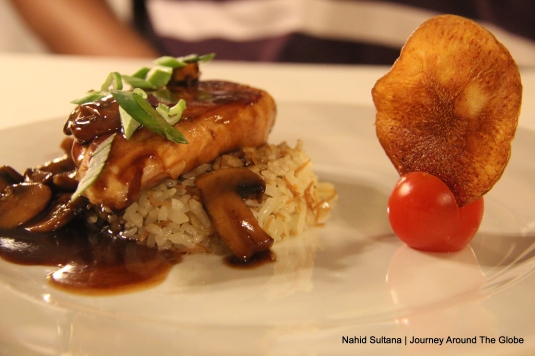 One of our dishes in Restaurant Philippopolis in Plovdiv, Bulgaria

For shopping, although we couldn’t look around much for the silly rain, lines of stores are located near Djoumaya Mosque in the old town. They looked very appealing but didn’t want to go to all the stores with my wet boots and umbrella and disturb their lazy times…blah.

PLACES WE’VE VISITED: We spent about 4/5 hours in Plovdiv. We could have seen more if the weather was not as bad. But I think we did ok even in the rain. We mainly stayed in the old town of Plovdiv, therefore, all these locations were done on foot.

1) VIRGIN MARY CHURCH: The original church at this spot was built in the 9th century. But the current edifice is from the mid-19th century. It’s free to enter but taking photo is prohibited.

2) ST. DIMITAR CHURCH: The present day church from 19th century was built on the site of a much older Christian basilica. This is also located in old town very close to Virgin Mary Cathedral. It’s free to enter but we weren’t allowed to take any photos.

3) ROMAN AMPHITHEATER:  Theater was built somewhere around 1st millennium. The open area for the audience had 28 concentric rows with marble seats.  Performances, forums, People’s Assembly, gladiator fights, and other major events used to take place in this stadium since Phillippopolis didn’t have an amphitheater, the typical Roman venues for such games. It ceased functioning in the 5th century when the structure was demolished and the building materials plundered.

Roman amphitheater from the 1st century in Plovdiv, Bulgaria

The theater is open from 9 – 6 pm (Mon-Sun) during the summer time and 9 – 5:30 (Mon-Sun) during winter time.  Ticket is 5 LV for adults (kids under 7 is free). There are some guided tours available which tourists can take from the ticket office.

4) ANCIENT STADIUM of PHILIPPOPOLIS: In the center of old town near Djoumaya Mosque, known as Djoumaya Square, the ancient stadium of Phillippopolis can be seen in a preserved underground area. The stadium was built in the 2nd century AD with seating capacity for 30000 spectators. This is one of the most notable facilities from Ancient Phillippopolis. In this uncovered area you can see a unique combination of some remains from an ancient street, a fortification wall, and an aqueduct.

Underground ancient stadium of Philippopolis and Djoumaya Mosque in the back in Plovdiv, Bulgaria

5) DJOUMAYA MOSQUE: This mosque was built in the second half of the 14th century but later it was burnt down to erect a church. But in 1435 the mosque was rebuilt. The building kept its appearance to from its 1784 reconstruction. This is the main place where Muslims of Plovdiv still pray. As an architectural and art monument of national significance, Djoumaya Mosque is under the protection of the Bulgarian State.

Opposite the main entrance is the lavishly decorated altar niche, the mihrab. The vaulted roof spaces are beautifully decorated with colorful ornaments interwoven with medallions with texts from the Koran. The minaret, adorned with ornaments of decorative bricks, rises high above the roof. The call for prayer is given from the top of the minaret.

Djoumaya Mosque from the 14th century in Plovdiv, Bulgaria

The mosque is located in the old town of Plovdiv. There is no entry fee but I don’t think they allow visitors during prayer, since it is still an active mosque. Don’t forget to take your shoes off before entering the place.

← Visiting the smallest town in the world – Durbuy, Belgium
Half a day in Dinant, Belgium →