BREMEN, GERMANY: This is the type of city I love to visit at any given day. It has all the ingredients to fulfill my cravings of visiting an “Old European City”.  I love visiting UNESCO World Heritage sites, because I know well ahead of time that those would be something really unique. Bremen’s Old Market place, with imposing cathedral and beautiful town hall (a UNESCO World Heritage site), is a great place to relax and absorb the atmosphere. My favorite memory of Bremen was eating German cookies while walking aimlessly in the winding alleys of Schnoor.

Bremen, like Hamburg, was a medieval Hanseatic League and still is an independent state in Germany with its own parliament. Situated by the river Weser, Bremen has the touch of both middle age and present time…all in one city. 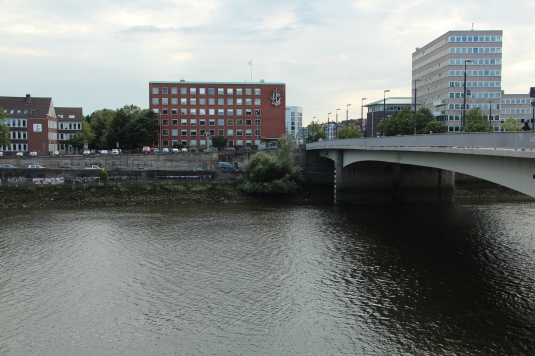 TIME of TRAVELLING: We visited Bremen in July, 2012. The day we spent there was ok for the most part, except for the short duration of rain in late afternoon. Other than that the weather was great for walking and doing outdoor things.

OUR HOTEL: Our hotel in Bremen was called Star Inn Hotel right opposite to the central train station.  Parking garage was very close along with some fast food restaurants, like Chinese, pizza, and kebab. The location was good since it was about 10-12 minutes of walk from Altmarkt, the hot spot in Bremen.

EATING and SHOPPING in BREMEN: Schnoor is a good place to buy some typical German bakeries and pastries. I spent nearly 50 euros just buying cookies and other sweet treats from a store in Schnoor; they looked and tasted fantabulous. Here are some of the names: kugel, kluben, and butterkuchen. We had our lunch right in the middle of Altmarkt in front of Rathaus…what a great place to just sit down and look around. There is a place called Kaffe Muhler, about 7-8 minutes of walk from the old market, which features a big Dutch-style windmill surrounded by some greenery, garden, and a small pond. I am not sure where the café is exactly, but saw the ad in our map and the actual place while we were talking towards Old Market. Even if you don’t eat there, go there just to take pictures of that old Dutch windmill. 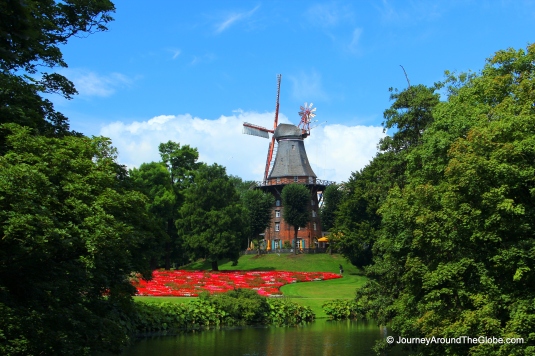 Most of the souvenirs in Bremen carry the sign of Die Bremer Stadtmusikanten…t-shirts, mugs, key-rings, and etc.  Visit the shops in Schnoor for exquisite local items. There are few kiosks and outdoor markets near the town hall where you can find gifts at very reasonable prices. Bottcherstrasse (a small street from Altmarkt) is another interesting place to buy exquisite hand-crafted gifts. 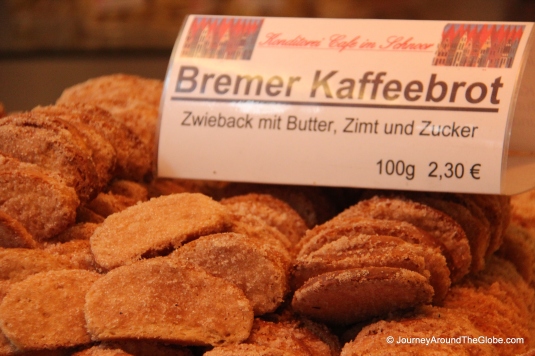 PLACES WE’VE VISITED: We had a whole day to explore Bremen. It was perfect and we got to see all the places we wanted to see. All the places were within walking distance starting from the Dutch-style windmill of Kaffe Muhler to Schnoor. 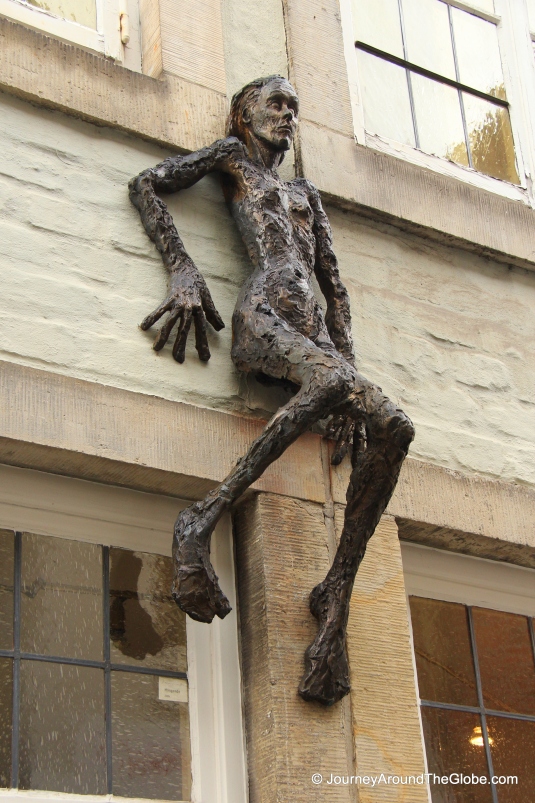 1) ALTMARKT or OLD MARKET and STATUE of ROLAND: The square has several important buildings including Bremen Town Hall, Cathedral of St. Peter, State Parliament (the glass building in between the cathedral and old town hall), and few beautifully decorated architectures from as early as 16th century.

The statue of Roland on the main square is the largest and most famous of the 26 Ronald statues in Germany. Knight Roland was a protector of trade and his statue appears in many Hanseatic cities of Europe. At 5.55m tall, the statue towers over everyone and has been a symbol of trading rights and freedom since 1404. It is a designated UNESCO World Heritage site. It is located in front of the town hall. 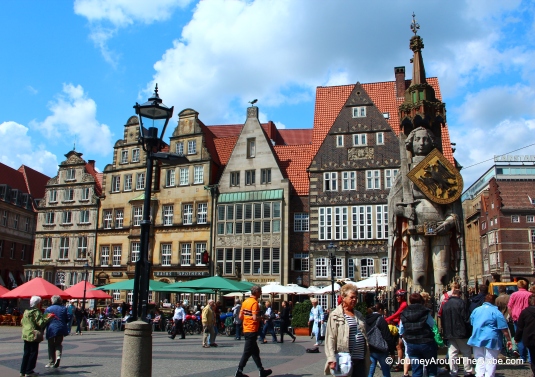 Statue of Roland in Altmarkt in Bremen, Germany

2) BREMEN RATHAUS (BREMEN TOWN HALL) and DIE BREMER STADTMUSIKANTEN (TOWN MUSICIANS of BREMEN): Built between 1405 and 1410, with a façade in the style of the Weser Renaissance that was added in the 17th century, this is one of the finest town halls in Germany and in whole Europe…inside and outside. Together with the Ronald statue and New Town Hall in Old Market, it is a designated UNESCO World Heritage site for an outstanding example of a late medieval town hall. 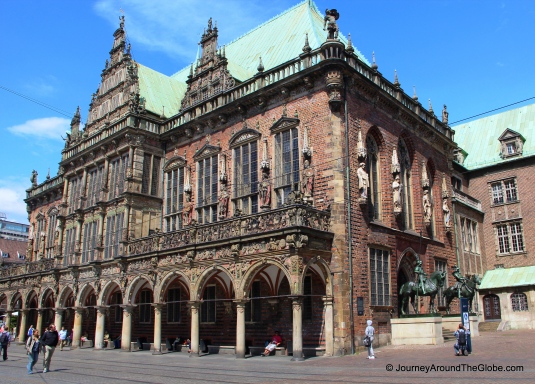 Inside the town hall is a museum itself and a perfect place to know city’s history. It tells the story of Bremen thru paintings, art deco, and everything else inside. This may not be as richly decorated as the one in Hamburg, but this building has its own treasure to show off to its guests. The guide was great in explaining thoroughly. The best part of this tour was the original rich wood carving in their “Chamber of Last”; its fantastic detail was one of the reasons to make this place a UNESCO World Heritage site.

Visitors have to walk about 50m to the tourist office to buy tickets for guided tour inside the Town Hall. Get your ticket early; they do get sold out pretty fast.  It is 5 euros for anyone above 13 years of age and lasts about 50 minutes.

“Town Musicians of Bremen” is the internationally acclaimed bronze sculpture (the characters of Brothers Grimm Fairy Tale) dating from 1951. It stands on the western side of the town hall. You actually have to stand in line to take a picture with it. But I guess it’s worth it, since it is the emblem of the city and the most photographed figure of Bremen. 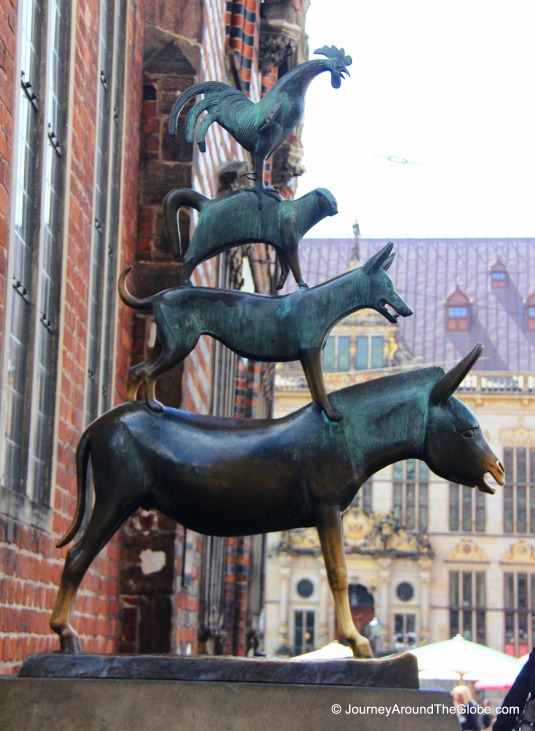 3)DOM ST. PETRI (CATHEDRAL of ST. PETER): It is over 1200 years old and a must-see in Bremen. Its distinctive early Gothic architecture dates from the first half of 13th century. The oldest parts of the cathedral – the west and east crypts – are especially noteworthy, as are its impressive organs. It has some of the great collections of middle age paintings. The cathedral is grandly decorated with large stained-glass windows, beautiful arches, walls, stone-carved sculptures, and finally a fresco of Last Supper on the wall on the main altar. Do take time to look and appreciate the colorful ceiling of this cathedral. It is free to enter and visitors shouldn’t miss the opportunity to go inside. 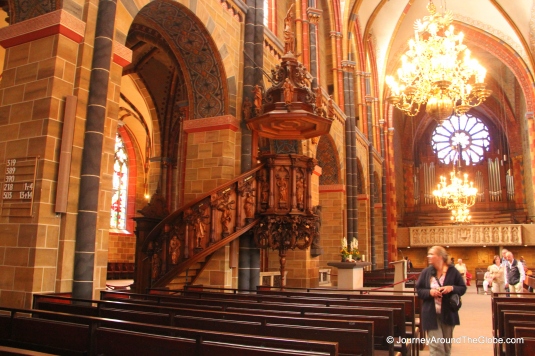 4) BOTTCHERSTRASSE: Just a little more than a hundred meters long, the Bottcherstrasse has been one of the most famous sightseeing attractions in Bremen since the 1920s.  This pedestrian arcade is Bremen’s “secret high street”. A gilt relief called “Bringer of Light” adorns the gateway. It is a short street but an incredible Art Nouveau path with some fine facades and courtyards with large amount of design details. Museums, arts, and crafts workshops, winding alleys-ways, restaurants, hotels, and high-end retail shops create their own little world here. An impressive Glockenspiel, from 1923, chimes here everyday at 12, 3, and 6 pm. 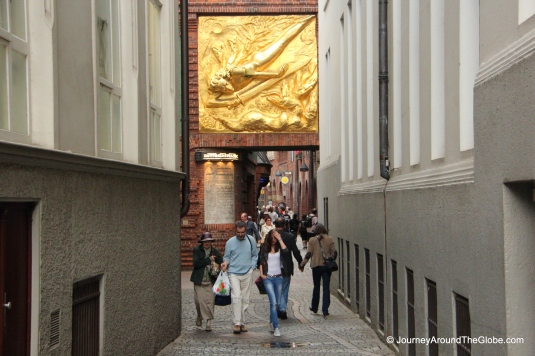 5) UNSER LIEBEN FRAUEN (CHURCH of OUR LADY): The origins of this church go back to the year 1020. Today’s Liebfrauen Church was built in 1229, from the Romanesque to the Gothic period. The wood carved pulpit is from 1709. There were tombstones all over its old floor. It seemed like the large stained glass windows here didn’t really depict any Biblical stories, rather displayed splash of bright colors.

6) SCHNOOR: Bremen’s oldest district, the Schnoor quarter, is a maze of 15th/16th century houses lining the alleys like pearls on a string and now home to artists’ and goldsmiths’ workshops and galleries. There are plenty of cafes, bakeries, and restaurants to sit and watch the world go by. It is fun to get lost (but you can’t really, it’s too small) in these twisting lanes and looking at the sculptures and shops. Some of the streets can get really narrow and you can barely push a stroller thru them. Hochzeitshaus-Bremen, a hotel in the heart of Schnoor, strongly claims to be the smallest hotel in the world. 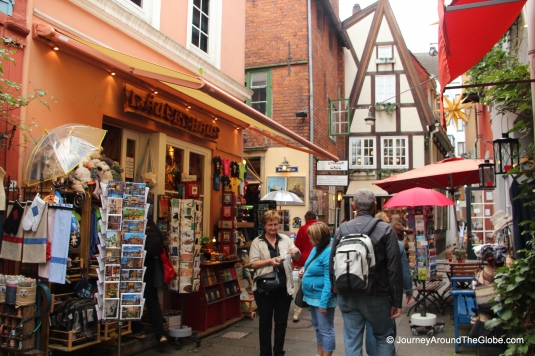 Cozy streets and markets of Schnoor in Bremen, Germany